Style Advice Bow Tie - How to tie a Bow Tie? 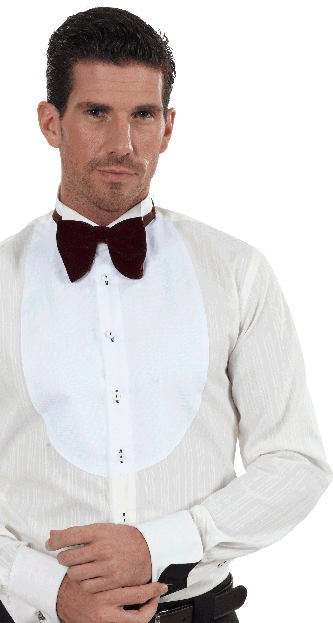 About the Bow Tie
The bow tie is a type of traditional necktie. A modern bow tie is tied using a common shoelace knot, which is also called the bow knot for that reason. It consists of a ribbon of fabric tied around the collar of a shirt in a symmetrical manner so that the two opposite ends form loops.
There are generally three types of bow ties: the

the clip on Bow Tie

the self tie Bow tie

.
Pre-tied bow ties are ties in which the distinctive bow is sewn onto a band that goes around the neck and clips to secure. Some "clip-ons" dispense with the band altogether, instead clipping straight to the collar. The traditional bow tie, consisting of a strip of cloth which the wearer has to tie by hand, is also known as a "self-tie Bow tie",  "tie-it-yourself Bow tie " or "freestyle" bow tie.
Bow ties may be made of any fabric material, but most are made from silk, polyester, cotton, or a mixture of fabrics.
The bow tie is a descendant of the knotted cravat. It was born from the need for neckwear that was easier to wear than the cravat and that would last throughout a more active day. By the end of the 19th century, the

were worn with dinner jackets and white bow ties with evening tails. Today bow ties are mainly worn on formal occasions, however, in the past decade bow ties for everyday wear have seen a rise in popularity. A bow tie is perfect for any man who likes to stand out among his peers.
Bow Tie Tying Instructions, how to tie-a-bow-tie?

o    Start with the bowtie lying face up. Adjust the bowtie so right side is shorter than the left. The end on the left will be referred to as A and the end on the right will be referred to as B.
o    Move A to the right side, across B.
o    Bring A under B and up through the neck loop.
o    At the joint, fold B towards the right and then towards the left to create a the bow shape.
o    Bring A stra­ight down over the middle of the bow shape that was made with B.
o    Fold A back towards the chest and pinch the fold.
o    Push the pinched end (A) through the loop behind B.
o    Pull on the folded parts of the bow to tighten.
o    Adjust until balanced on both sides.

From the accessories collection https://www.bivolino.com/en/accessories-bowtie

Welcome to Bivolino.com - Made to Measure Shirts

Receive offers and be aware of special events and new products.

Earn £5,- when registering for the newsletter.